Apple has kept up its constant move towards introducing newer devices and models every year. As a whole, this is the trend with every manufacturer of smartphones. The never-ending releases of newer phones by every manufacturer with a few new features are truly never ending!

Last year, Apple’s anniversary edition boasted a huge redesign of the iPhone with its iPhone X. this year, we meet its successor, the Apple iPhone XS. As the name suggests, it is Apple’s traditional S version looking exactly the same, yet enticing consumers globally.

Current owners of the iPhone X will be measuring the pros and cons for a worthy upgrade. While older model users will consider upgrading to this model or a model from last year. The upgrade to the iPhone XS from the X is such a modest upgrade that it is almost impossible to spot! Well, that may sound a bit harsh but whether or not that’s entirely true, we will leave for you to judge.

Since, it is not a drastic upgrade, Apple too focused on its ability to conduct actions rather than its specs and features. It is a member of the same family of specs as the X. So, it was smart of Apple to focus on the capabilities and functionalities of the iPhone XS rather than anything else. A new color… the best display in the industry… and a few other enhancements… let’s take a look at the Apple iPhone XS 2018! Also check out Best Upcoming Flagship Mobile Phones of 2019.

The launch of the Apple iPhone X in 2017 was an absolute craze! People wanted to get their hands on the brand new design & innovative style of the iPhone. But this year, there was no hype of that nature!

The need for the unexpected was filled last year and so this year there was nothing more to expect. The model is identical to X with some key upgrades. A larger memory with 512GB of storage, an all-new A12 Bionic chipset to improve the speed and camera performance, and an enhanced display. The Apple iPhone XS is now available for pre-order & will be available in-stores on September 21, 2018.

Let’s Talk About the Lack of Design Changes!

As we already know, there are no new design changes to really discuss. Apple has maintained its reputation of releasing the same design as last year by following it up with a new S edition the next year. So, there are no physical changes to the iPhone XS and it will be almost impossible to tell the two apart when sat next to each other.

One of the noticeable design changes is the color scheme. A shade of gold is not in the mix of the iPhone giving it a striking new look. Apart from that, the frame and size is the same and the trendy notch at the top is back again with no home button, just like the iPhone X.

The controversial front & back with glass make a comeback again. So it is still a danger to the slightest of drops. While there are many phones in the market with sleek designs, apple manages to still come out on top with its striking looks. Other copycat designs may look the same, but the feel and the premium build quality of the iPhone is unbeatable.

The high price is justifiable by just holding the phone in your hands. It is simply unmatchable with any phone currently available in the market. The most striking smartphone in the market and yes, no traditional headphone jack as iPhone has eliminated it long ago. The left & right side of the XS is still the same with the trademark volume and lock buttons and the silencer.

The back looks the same as the iPhone X as well with the elegant placement of the vertical dual camera. The glass back is as Apple claims very durable and it does feel superb. With the XS now coming in gold, the look is absolutely stunning and is clearly the one to buy this year.

So let’s look at why users would love to get their hands on the new Apple iPhone XS in 2018! 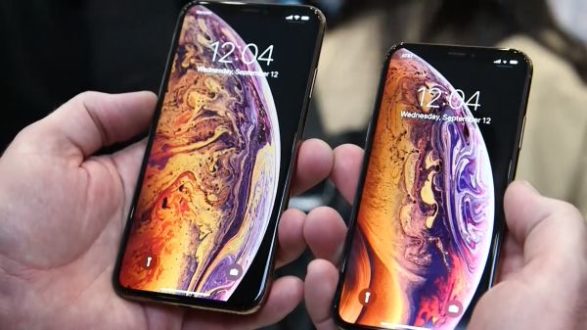 What an Amazing Screen, Indeed!

The iPhone XS with its 5.8-inch OLED screen is now the smallest available new device from Apple in 2018. It is one of the most impressive displays available on any smartphone in the market today with rich colors, deep blacks and strong contrast ratios. The size is perfect as it’s much larger than prior iPhones but not too big be uncomfortable.

The new iPhone has its dual speakers on the same position, the bottom of the device. While, they spit sound downwards, the higher volume will let you enjoy anything even without headphones. The improved audio output technology means that the sound you hear is richer and more dynamic.

How the Camera Shoots

The camera update allowed this iPhone to get the gimmicks, more specifically, the dual cameras which was only limited to the Plus edition. The iPhone camera now can understand and improve photos by working out scenes to enhance overall photo quality. As Apple showed off on stage of the event, the quality of the photos are simply incredible.

How Long Will the iPhone Last?

Like always, Apple did not mention or talk about the battery in terms of its numbers but focused on its ability to perform. The iPhone X last year ran on a battery capacity of over 2,700mAh. The 2018 iPhone XS is claimed by Apple to outperform it by at least 30 minutes due to its new & improved longer A12 Bionic chipset.

No Performance Issues With the new Apple iOS

Using the iPhone XS was an absolute treat! The apps open & close instantly, camera fires rapidly and just scrolling about in the phone is a magical experience. The speed of the iPhone is phenomenal with the new A12 Bionic chipset. It’s powering all the new iPhones of 2018. The processor has “next-generation Neural Engine” with eight cores, allowing it to process up to 5 trillion operations per second.

Time for the Verdict: Success or Excess?

Looking back at the unveilings of Apple devices over time, the S years have always been somewhat a downer. As always it was good from the business end of Apple, but consumers would be left in a daze of whether or not to get something which has slightly better specs in the same, almost exact device.

Some of the improvements offered are truly notable. The storage, the volume, the screen colors will all be highlights of the Apple iPhone XS. But is that enough for you to upgrade?

Last year’s model will be a bit cheaper this year, but the decision will be tough to ignore the models whether it’s the XS, XR or the Max.

There’s a real spur-of-the-moment rush of adrenaline once you have it in your hands. That’s the effect of the Apple iPhone XS. But you must use a case to protect its pristine look overtime. I am looking forward to using my iPhone XS soon in the next few days. Hope this comprehensive review of the iPhone XS will have cleared any doubts you had for plunging into an Apple store for your next Apple iPhone.

I hope that reading this review has allowed you to learn more about the new Apple iPhone XS. Now, hopefully you can make an easier decision whether or not to upgrade to the newest Apple sensation. Let me know your thoughts and comments on the new iPhone in the comments section below.

Visit the Bikroy.com marketplace today to find thousands of listings of new and used phones. Search by your specific requirements, price range, brand, model, etc. to find the phone which is best for you.